What is a Greek Orthodox Wedding?

I’m sure the burning question is there ( because we always get asked) Yes, Jacob converted and is Greek Orthodox. Below is a picture of him after he was baptized. No, he did not get baptized in a kiddie pool like in My Big Fat Greek Wedding. 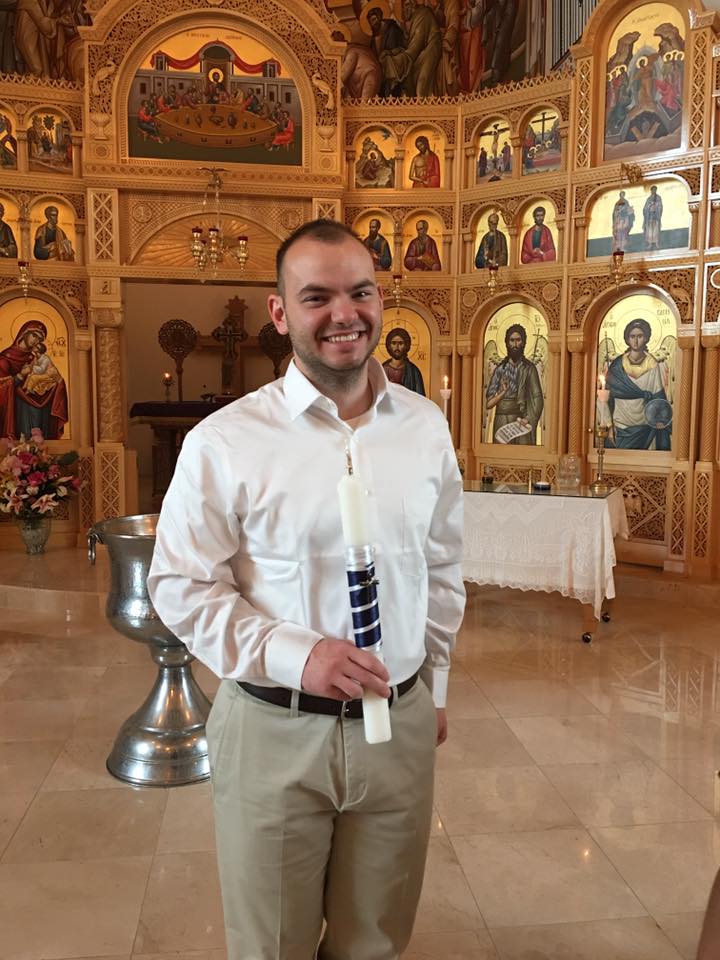 So now that that’s out of the way. We are going to share our ceremony pictures! We had a Greek Orthodox wedding at Saint Basil the Great in Houston. We both mutually agree that our favorite part of our WHOLE wedding was the ceremony. Maybe the service was so exceptional because we understood and spent time studying what each process meant. Nonetheless it was perfect. 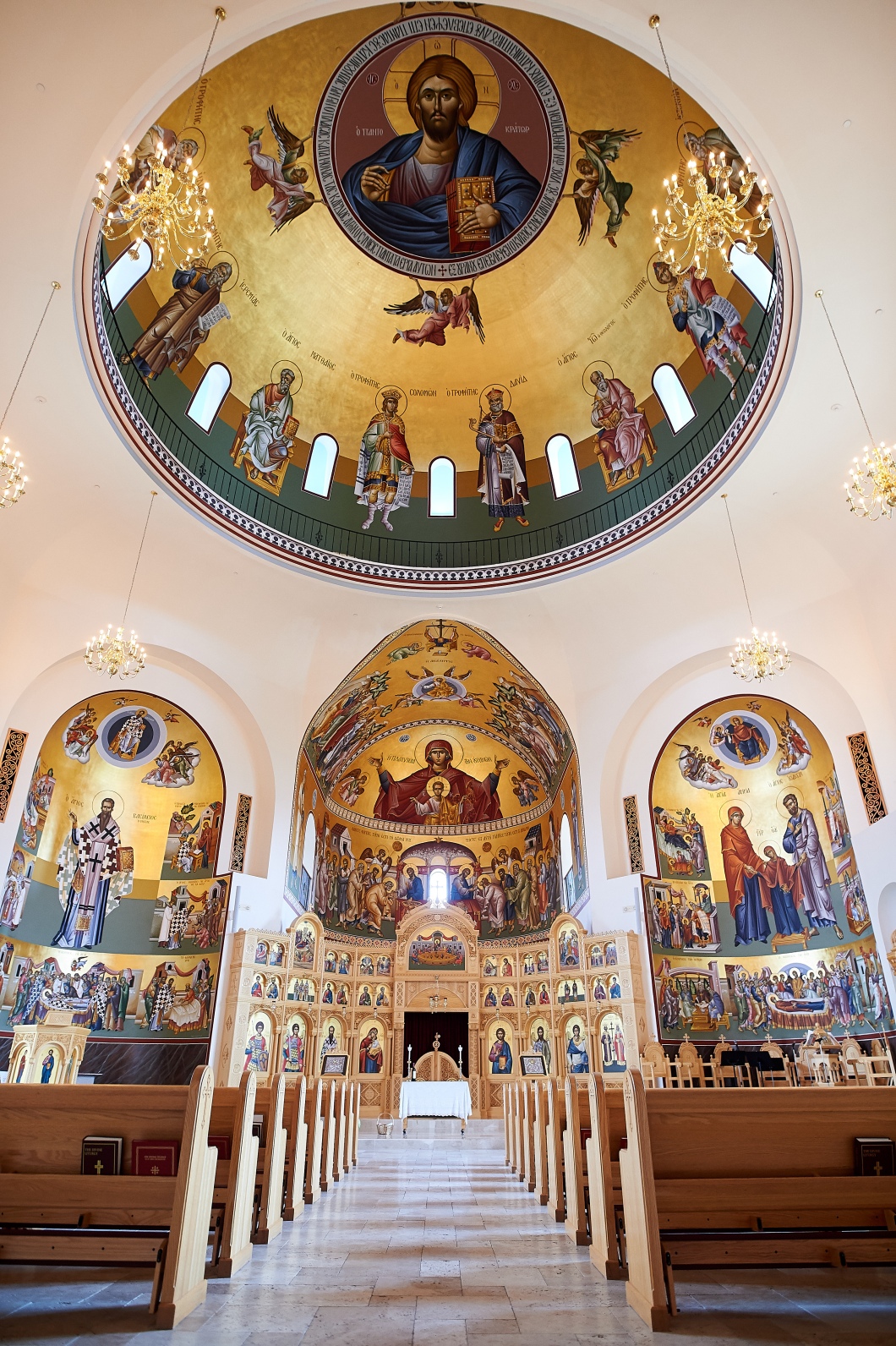 The sacrament of marriage in the Eastern Orthodox Church joins two believers into one. Sacrament of Marriage consists of. 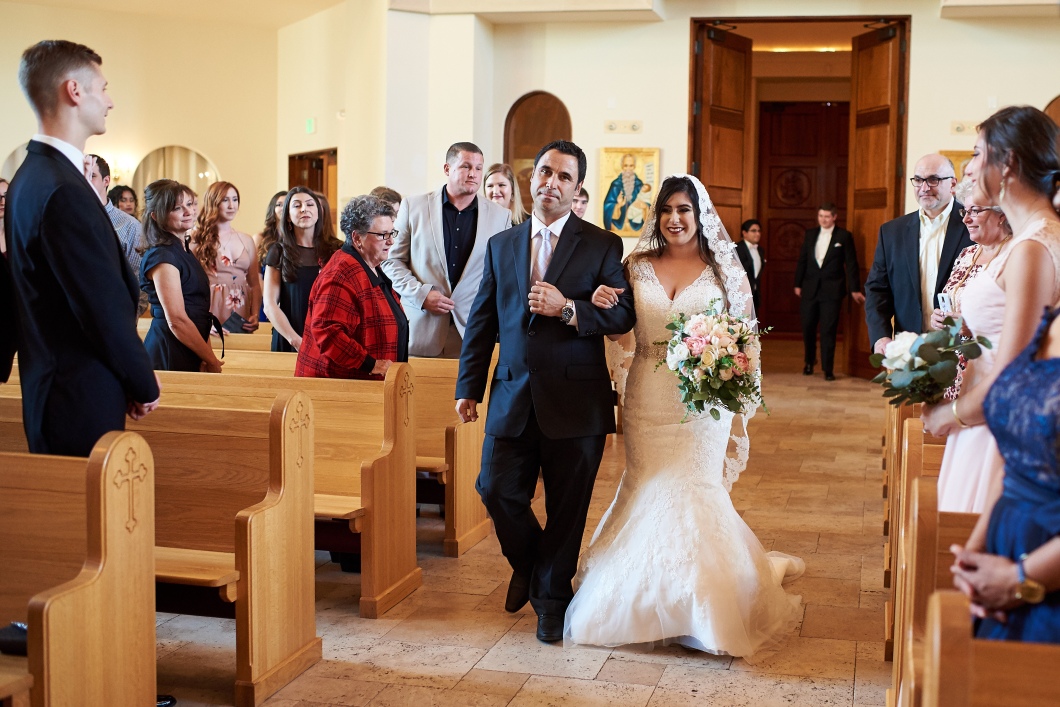 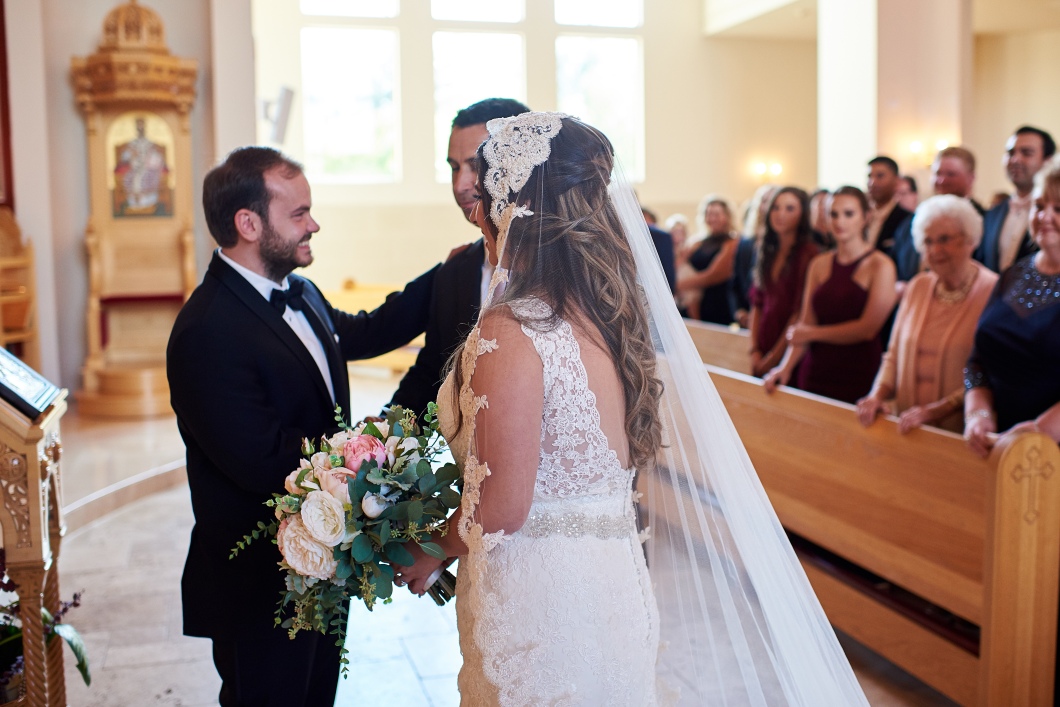 The rings are first blessed by the priest and then exchanged between bride & groom. The rings are blessed by the priest, who touches the foreheads of the Bride and Groom three times with them. He does this three times in the Name of the Father and the Son and the Holy Spirit, first from the groom to the bride, and then from the bride to the groom. The back and forth movement can be interpreted to mean that the lives of the two are being entwined into one

The priest then places the rings on the ring fingers of the right hands of the two. It is noteworthy that the right hands are used in the putting on of the rings, since according to all Biblical knowledge we have, it is the right hand of God that blesses; it was to the right hand of the Father that Christ ascended; it is to the right that those who will inherit eternal life will go.The rings are then exchanged three times on the fingers of the bride and groom by the Best Man BUT in our case since our Best Man isnt Greek Orthodox our Maid of Honor( Koumbara) did it. This exchange further expression and witness that the lives of the two are being brought together. The exchange signifies that in married life, the weakness of one partner will be compensated by the strength of the other. Apart, the newly betrothed are incomplete, but together they are made perfect.

What are wedding candles are how are they used?

The bride and groom each hold a lighted candle during the service. The candles remind the couple of the light of Christ who is with them throughout the sacrament and their coming life together.

The wedding candles are usually tapered, white and 18″ – 24″ in height. They are lit by the priest during the service and handed to the couple to hold for part of the service. Our candles were beautifully decorated by my sister with mini olive tree branches. They looked SOOOOO GREEK!

What are stefana (Stéfana)? The Crowning of the Bride and Groom.

The Crowning is the highlight and focal point of the Sacrament of Holy matrimony. The priest then takes two wedding crowns, or Stefana, and blesses the bride and groom in the name of the Father, and the Son, and the Holy Spirit, and then places the crowns upon their heads

Stefana are used for The Crowning of the couple. The wedding crowns (Stéfana) are the signs of glory and honor with which God crowns the Bride and Groom during the sacrament. The Bride and Groom are crowned as king and queen of their home, which they will rule with wisdom, justice, and integrity. They represent the couple’s giving of one life totally to the other and through the other to Christ. At the end of the wedding service, the crowns are removed from the couple and the priest prays that God will receive these crowns into His Kingdom. We have ours hanging in our bedroom now in a beautiful box made from Greece ( Thanks Tsounakas Family!)

After the priest places the Stéfana on the heads of the Bride and Groom, the Koumbara exchanges the crowns three times as witness to the sealing of the union. The crown swapping begins with the koumbaro/a behind the bride and groom – and the koumbaro/a places the crowns three times on the head before the procession around the altar. The bride is at left, the groom at right. 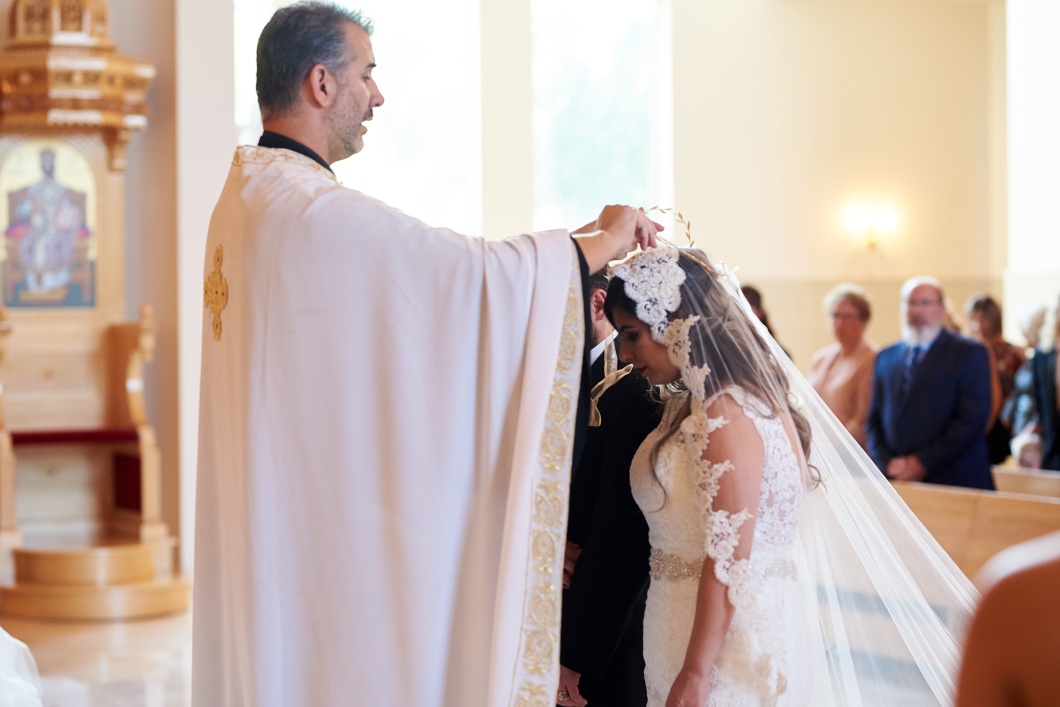 PLACEMENT #1: The koumbara holds the crowns in his or her hand and crosses his hands, RIGHT hand over the left , and then places the crowns on the heads of the bride and groom.

PLACEMENT #3: For the third switch, the koumbaro will move his right hand back under the right and then around over again the left hand. 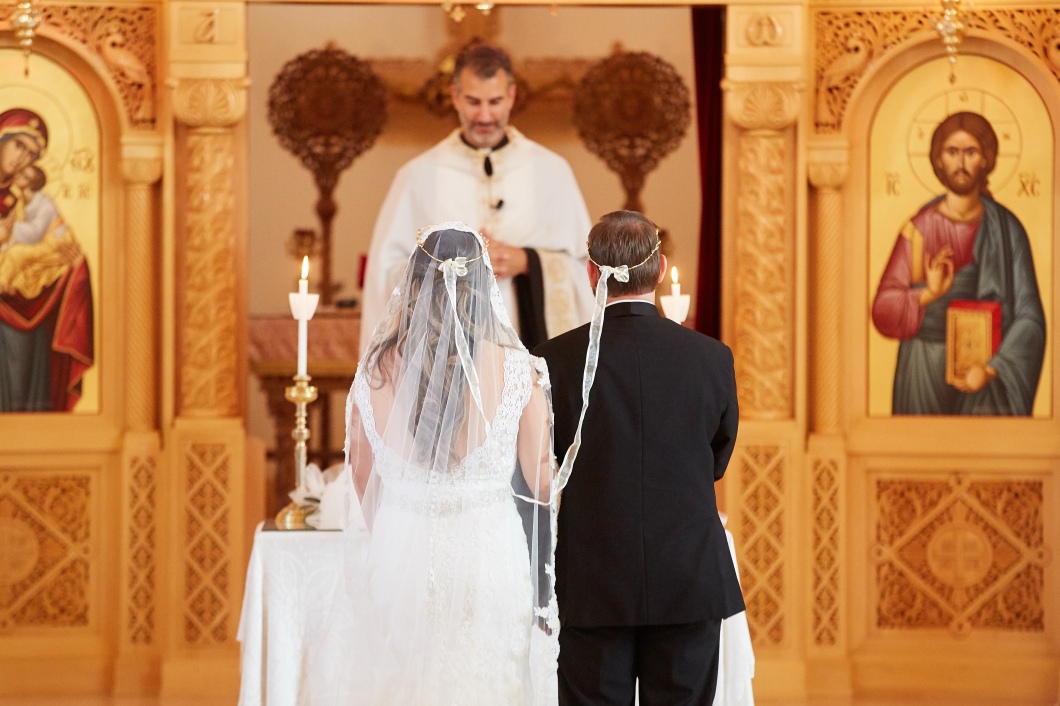 The order is specific and symbolic – the right hand leads over the left on the first switch/placement – just as the right hand leads with all religious ceremonies. Generally the crowns are interchangeable or identical. If the crowns are specific for the bride and groom, then the groom’s crown starts on the bride and the bride’s crown starts on the groom. That way after the exchange, they are resting groom’s crown on the groom’s head and bride’s crown on the bride’s head. They wear the crowns this way for the remainder of the ceremony and as they circle the altar. 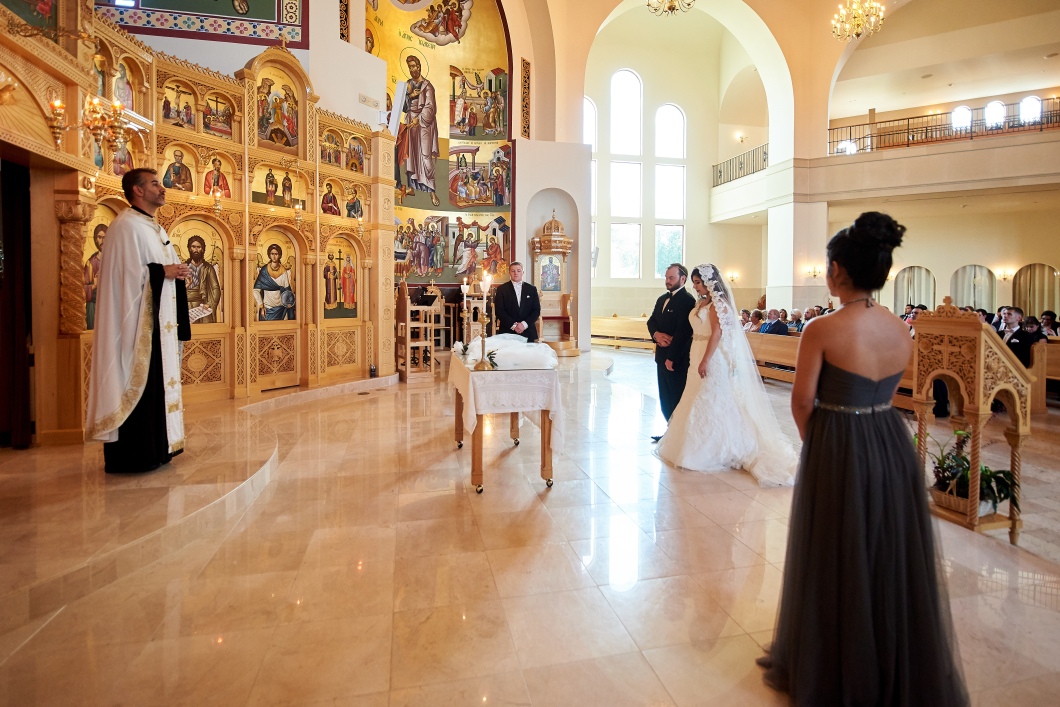 The reading is done after the Crowning. The designated reading from the scriptures is from the Epistle of St. Paul to the Ephesians where Paul talks of love and respect.

The Orthodox Wedding tradition ceremony has a ritual of the drinking of the common cup. On the altar table is a wine decanter with wine and a common cup. After the priest reads Bible passages, the priest pours the wine into the single cup and the bride and groom take three sips of wine from the shared cup.

The ritual of the common cup is based on the wedding of Cana of Galilee, where Jesus turned water into wine. Just as wine was drunk at the wedding in Cana, the Bride and Groom share a common cup of unconsecrated wine, symbolizing the sharing of all that life will bring. The cup represents life and symbolizes they will share everything. Their sorrows will be divided in half and their joy will be doubled.

Here is a picture of us drinking from the common cup: 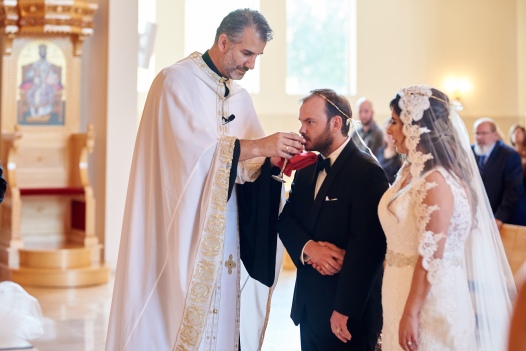 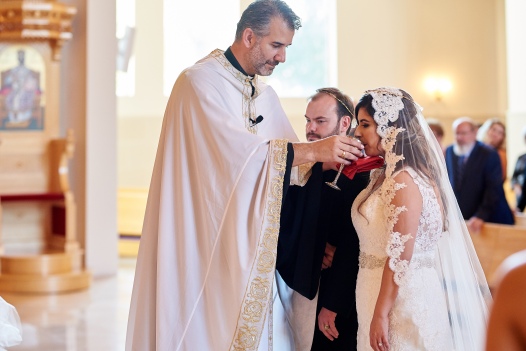 The priest lead us, hands joined, in a circle around the holy table as we took our first steps as husband and wife. (Disclaimer – Jacob and I were legally married a year before our orthodox wedding, but this just felt like we officially became Husband and Wife!)

The circling around the table signifies the promise of the husband and wife to preserve their marriage bond until death parts them. The ceremony is concluded with the priest invoking God’s blessings and removing the crowns. 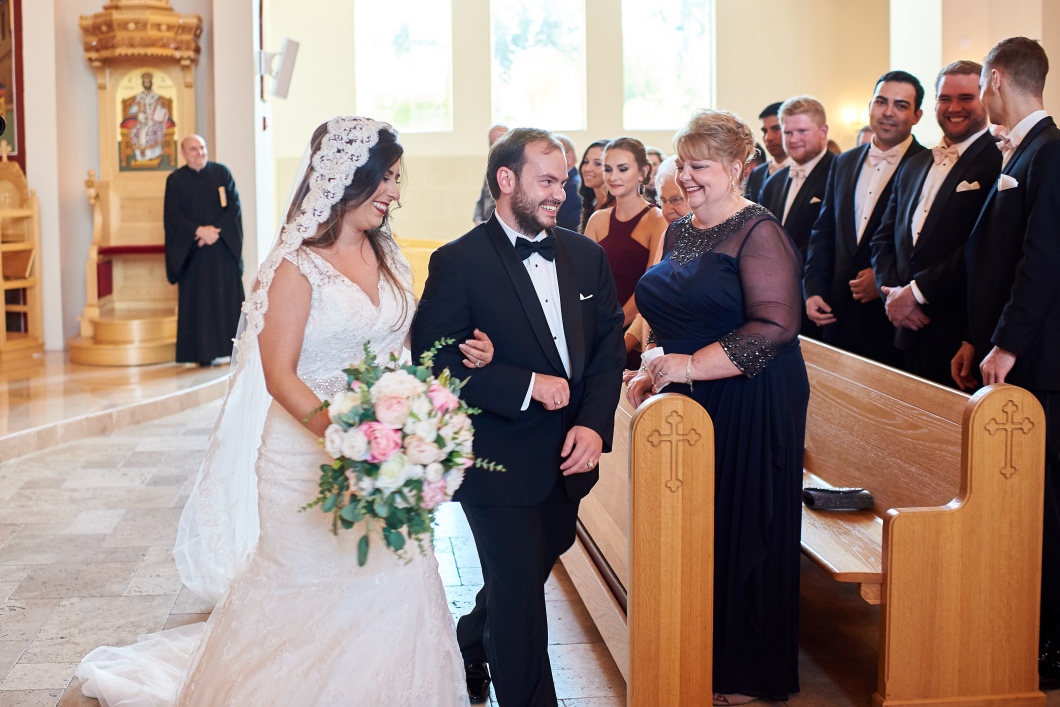 OMG you made it to the end! Give yourself a long pat on the back!!